This document summarizes the findings and improvements that have taken place since the event occurred and goes into details how this could have happened and what has been done to prevent similar trouble in the future.

It also describes the impact that this had to our customers.

The OTC team would like to apologize for the trouble this has caused to our customers! We have been working hard to earn the trust of our customers. We want to share the details of the analysis and improvements to provide transparency into the hard work giving our customers the ability to understand what happened and to judge themselves whether we have effectively addressed the problems.

If you have read the previous detailed explanations of the trouble before, you do have a rough picture. If you would like to only get a brief update, here is a very short summary of the news:

After the alarms displayed failures on the platform to the operations team, the engineering team quickly validated that the failures were broad and escalated the issue. The operations team created a “war room” setup, where key operators, management as well as employees from our platform partner Huawei gathered in a virtual room where all the actions for analysis, mitigation, corrections and communication were gathered.

It was rather quickly determined that the issue was caused by networking trouble. While the admin plane is well separated and admin access to all hardware was unaffected, it was suspected that the internet connectivity for customers was failing. A few tests later it became clear that while this connection was degraded in performance, the real issue was the connection to the services in the provider network (100.64/10). This network hosts the API gateway and other internal services that are provided to the VMs such as the local DNS service, NTP and repository mirrors. The machines behind those services were confirmed to work fine, just network access for customers was impossible.

Next was the investigation of the core switch and the suspicion of a switch chassis failure was investigated and ruled out. A detailed analysis of the traffic on the switch finally revealed that there was a storm of broadcast packets that caused overload on connected systems. The storm was determined to involve the interswitch connection and two ports with EIP monitoring devices (NetStream cards) connected. Disabling these two ports caused the system to function normally very quickly again.

The war room setup was continued for another day to fully analyze the issue and drive improvement actions.

The EIP traffic monitoring service was reestablished after the first version of a root cause analysis was published and reviewed internally during the night and a change that separates and reenables the monitoring service was approved and performed in the early morning of Thu, 2017-11-09. After that the first report to our customers was published and more investigations on improvement actions were performed, most of which are completed by now.

Two ports on each core switch connect to a “NetStream” card, which analyzes traffic for monitoring the traffic of external IP addresses. These cards only consume data, so beyond network management traffic (ARP requests) they should not cause any outgoing traffic. And they did not until 2017-11-08 13:43 CET.

What the team was unaware of is that the cards replicate the traffic between the two ports, thus effectively acting as a network bridge device between the two ports, resulting in a L2 network loop. This would cause trouble with broadcast storms in normal operations if the Spanning Tree Protocol (STP) would not prevent it. The core switch had correctly detected the loop and set one of the ports to blocking.

This is normal and perfectly fine STP behavior -- allowing network topology with redundant L2 paths to network segments for redundancy. However, the reliance on STP was unintentional here -- in general we separate the network into many different VLANs and use link aggregation for redundancy rather than STP controlled L2 failover.

At 13:43 CET a planned change was performed on one of the core switches, configuring a super-VLAN (with many subordinate sub-VLANs) to enable access for a DirectConnect customer to all his networks.

We run the switches with logging enabled, so we can debug issues after they occurred. Due to a bug in the switch firmware the logging of all the affected sub-VLANs was serialized with the processing the BPDUs, the packets that are used to make STP work. This caused a BPDU processing timeout -- 30s later, the second NetStream port went into forwarding state. The next broadcast packet on the default VLAN 1 caused the broadcast storm to emerge.

The core switches noted this by repeated MAC address flapping between ports, which then also caused the alarm to be raised. While the core switch was unimpressed by the broadcast storm, other devices (e.g. firewalls) were overloaded by this broadcast load, resulting in a huge packet loss rate. This finally resulted in a number of network connections to be very slow or even completely fail.

Let's summarize the above findings and look at the problems that came together to result in the issue:

The immediate reaction of the Operations war room team after observing the broadcast storm was to disable the NetStream ports. This immediately stopped the storm and the system went back to normal within seconds. The side effect was however that no more monitoring data was fed to CloudEye for monitoring of traffic from EIPs.

More fixes have been implemented, see below for further Improvements.

We would like to mention that the infrastructure did not lose any VMs or any data on the storage devices due to the network trouble, nor were any unintended or unauthorized operations performed or made possible. The integrity of the platform was and is unaffected by the network outage.

Nevertheless we consider our first outage this year as severe. It affected both availability zones in our eu-de{.docutils .literal} region, thus also affecting the customer setups that are normally very safe by having been properly configured to deal with one availability zone going down.

Customer setups in OTC were affected in four ways: 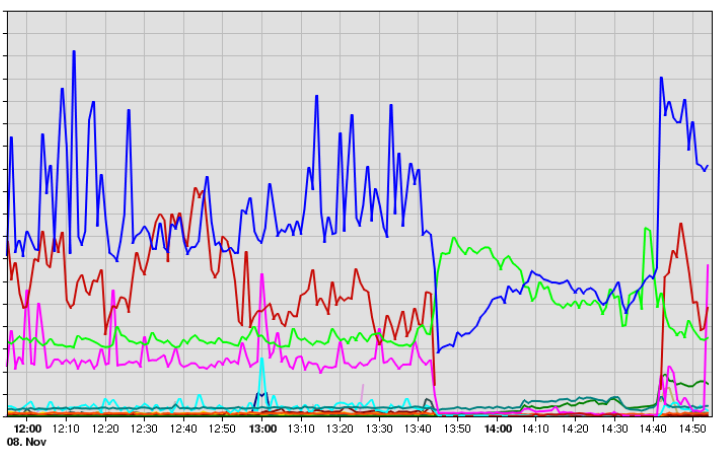 The result of the network trouble is very visible in many of our monitoring systems. The graph to the right shows the inbound traffic from the internet into OTC by protocol on Nov 8 (times in CET). The blue line is for https (or more precisely port 443) traffic, the other colors denote traffic to other ports. The performance degradation is clearly visible.

We have had contact with a number of customers following the outage and have supported by answering questions or -- if requested -- in a few cases with the investigation of issues. Please reach out if you have still questions or are looking for support.

Can this happen again?

A very similar issue is extremely unlikely. With the change of NetStream card config to layer 3, the VLAN review and changes, the L2 loop avoidance with STP blocking monitoring, the broadcast storm mitigation, and the switch firmware fix, we are very safe against similar issues. Actually with all the networking improvements performed, we have a networking setup that has several protection layers against many classes of possible failures.

Would another Availability Zone help?

While spreading resources over two or more AZs helps a lot and is best practice on public clouds to achieve high availability, this event was one of the few, where it did not help to mitigate the problem. The reason is that the broadcast storm was transferred over our high-bandwidth low-latency DWDM connection between the two data centers.

What can I do to make my application more resilient?

Most issues that could potentially occur in our cloud environment would only affect one availability zone (AZ). Only due to a configuration mistake (leaving VLAN ID 1 enabled) and all the other circumstances could this issue affect both. As mentioned above, there are now several layers of protection against any similar issue, so we consider a similar issue extremely unlikely. Customers that have set up their cloud application such that they can cope with a single AZ to fail can still expect to see availabilities above 99.95%.

For even higher availability, a multi-region setup or even a multi-cloud setup can be implemented. Multi-region is possible with our Singpore (ap-sg{.docutils .literal}) region.

When the issue occurred, the T-Systems' Operations team was quickly pulling the war room team together to react. We also got our partner Huawei aboard very quickly to support the investigation. The collaboration was open, helpful and very effective.

The engineers exposed a spirit to dig into this until every relevant detail was fully understood and there were really good discussions on what the best improvements would be. A significant number of them was identified and even more were (and still are) discussed between the experts. Decisions were taken and implemented with diligence.

The author would like to thank the team for the hard work!

We would also like to apologize again to you, our customers and thank you for your understanding -- we are very aware that this outage caused trouble to you and that we failed to deliver to our own and your expectations that day. We have learned a lot and shared the learnings with you. We hope you continue to work with us.